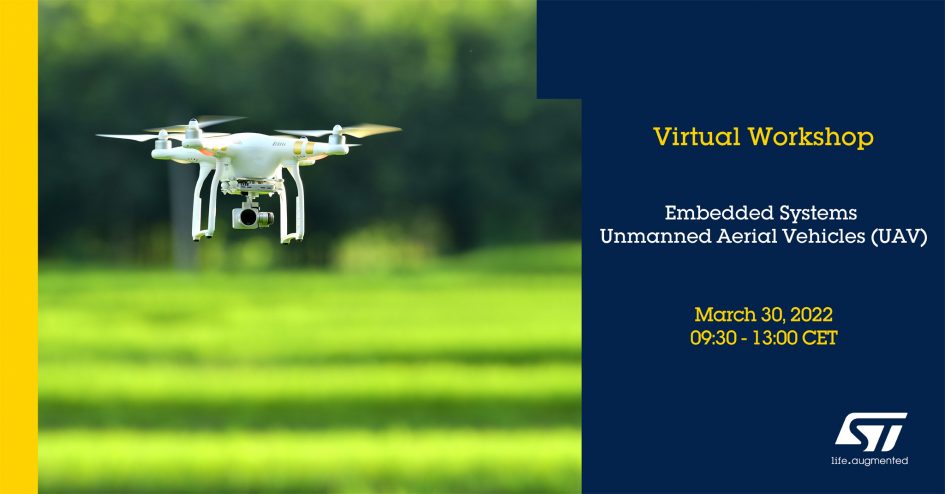 Unmanned Aerial Vehicles (UAVs), commonly referred to as drones, are used in a variety of applications such as photography, sport events, structure inspection, science, and many more. This event is dedicated to the open-source communities who are enabling fast implementation of new features and performance improvements of UAVs. Some of these will present their projects and share with us their views and experience.  The event will start with an overview of the regulations around UAVs and their evolution in various countries. ST will present some of its latest MCUs, MEMS sensors, and motor control devices for UAVs.

Who should participate? Embedded professionals and enthusiasts. Bob has been involved in radio communications, electronics and amateur radio since far too long ago to remember. His career spans technical and senior management positions. A return to his core interests (embedded systems and radio) in recent years sees his current work role being in embedded system design and test engineering at UHS in Australia.On the amateur radio aspects Bob became involved in high altitude balloon projects 6 years ago and now works with colleagues in Australia and Germany on MCU based high altitude balloon tracking systems.

Domenico is Professor for Avionics and Air Traffic Management at the Università degli Studi di Napoli Federico II (UNINA) in Italy and at the Italian Air Force Academy. He has been Principal Investigator for several research projects in the fields of Sensors and Systems for Guidance, Navigation, and Control, Unmanned Aircraft Systems, and Air Traffic Management. He has published more than 100 indexed articles for International Journals and International Conferences. He has been Chair for Sensor Systems and Information Fusion Technical Committee SSIF-TC of American Institute of Aeronautics and Astronautics AIAA. He is responsible of Laboratory of Innovative Flight Technologies LIFT that is devoted to Research and Technology Transfer activities at UNINA. He is Chair of the Degree Course in Management of Aerospace Systems for Defense in cooperation between UNINA and the Italian Air Force Academy. Adriano received his degree in computer science engineering and PhD in electronic and control engineering from the University of Catania, Italy in 2000 and in 2004, respectively. His scientific interests include nonlinear systems and their application to image, bio-inspired robotics, complex dynamics, mechatronic and human system interaction. He has more than 30 publications, including papers in academic journals and conference proceedings. He is now with STMicroelectronics where he is Technical Marketing Manager for Consumer, Healthcare, Motor Control and Robotics segments. Giovanni is with STMicroelectronics since 2004 and is a proud member of the ST technical staff with over 30 years of experience in the field of Embedded Software development. When not writing SW for ST, he keeps himself busy writing Open Source SW. His “hobbies” are improving SW processes in ST, tutoring, teaching, working with universities and organizing events. Author or co-author of several patents related to security and smart cards technology. Author of the Open Source ChibiOS Realtime OS. In general, interested in science, especially physics, astronomy, and electronics. Gautier is an assistant-professor at the French Civil Aviation University (ENAC) in Toulouse, France. As a member of the UAV Research Program, he is working on flight dynamics and control of micro-UAVs, modeling and simulation, architecture of embedded systems, trajectory planning and formation flight. He is project leader with the open-source UAV system “Paparazzi”. Ramón is the General Manager to the Dronecode Foundation, a non-profit organization under the Linux Foundation created to host open-source software and hardware projects for drones. Where he leads the thriving community of more than 10,000 developers and commercial adopters behind projects such as the PX4 Autopilot and MAVSDK. Ramón has been an active contributor to open-source for more than a decade, working as an individual contributor and a community leader. He’s been actively advocating for open standards and open source in the drone industry. He is host to the PX4 Developer Summit a yearly event that brings thousands of drone developers and roboticists together. In 2021, Ramón was awarded the Industry Impactor award by AirWards for more than nine years of service to the Drone Industry. Some of his projects include DroneKit, which was used to develop the first-ever “smart modes” in drones, that lead to the massive success of the “3DR Solo” by “3D Robotics”. Ramón is an avid gamer and reader of Sci-Fi. He’s been working remotely for the past decade, based in Tijuana, Baja California, Mexico, where he lives with his family. Andrew is the systems lead for the ArduPilot project, a widely used open source autopilot project. Andrew holds a PhD in computer science and is known for the development of a number of widely used open-source projects, including Samba, rsync, ArduPilot and ccache. In 2018 Andrew was awarded a Doctorate Honoris Causa by the Australian National University for authoring Samba, co-inventing rsync, and for contributions to free and open source software. In 2020 he was awarded the Medal of the Order of Australia (OAM) for services to Information Technology. Salvatore is a Postdoc Fellow in Industrial Engineering at the Università degli Studi di Salerno in Italy where his activities are focused on Industrial Vision Measurement Systems. He has carried out research in inertial measurement systems and positioning algorithms, power management systems, and smart metering. He has been Mentor of the NeaPolis Innovation Summer Campus for three years. His main interests are industrial control systems and embedded real time signal processing on microcontrollers and DSPs.